On Thursday, July 18, 2019, Mr. Kampon Tansacha, the President of Nongnooch Pattaya Garden, along with Mr.Prathip Somboonpulpipat, travel and sports of Chachoengsao Province, Also, Mrs. Duangjai Kanthiranon, Director of the Tourism Authority of Thailand at Suphan Buri Province, and the media witnessed joined a ceremony at the Cactus Garden 2 of Nongnooch Pattaya garden. Mr. Kampon Tansacha, the president of Nongnooch Pattaya Garden, stated that Nongnooch Pattaya Garden has launched a one month free trip project to people, who reside in 2 provinces of Chachoengsao and Suphan Buri to visit the garden free during 1st –31th of August, 2019. In this case, those people just show their ID card to enter to the Garden. Moreover, he also stated that this project has started the operation since November 2018 to support the Eastern Economic Corridor or EEC according to a governmental policy and to provide opportunities for people to visit the garden and to see the novelty of the garden that has been developed continuously. There are many changes within Nongnooch Pattaya Garden, and we strongly desire that the 2 villagers of these 2 provinces will be able to publicize to the tourists, both Thai and foreigner. So, they may know what we have in the Eastern region. 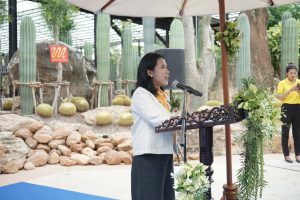 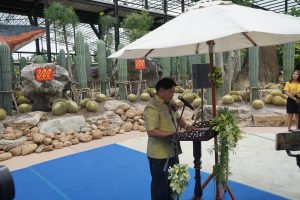 In this occasion, Nongnooch Pattaya Garden also has launched a 9 meters carnivorous dinosaur name “Altispinax” which has discovered in England in 1856, and it is considered one of the first dinosaurs and lived in the early Cretaceous period. It is about 140 million years ago. It has an outstanding shape and extends from the body. 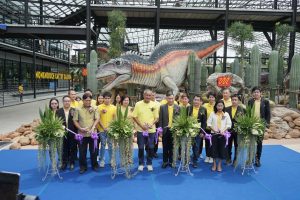